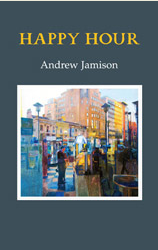 Andrew Jamison’s debut collection, Happy Hour, is preoccupied with the towering themes of time and money, but the deceptions of “the clock on the wall” are a particular concern. Unable to buy into the world view of “The Starlings” where “a tick” is simply “a tick, a tock a tock, time time”, time and again the poet witnesses “obliterations of the commonplace”, whether in the form of optical illusion (a cinema’s “ocean / of curtained wall” recalled from childhood), “the strange behaviour of unnameable birds”, or the way that “nothing / comes but every way that nothing can”. Jamison knows that, however we spend our time, time spends us: the book’s title speaks of the fleeting nature of happiness and our clumsy pursuit of it, but also hints at the energetic, demotic, wistful yet upbeat tones the poems strike. Here is a poet with “disappointment deep / in the mayonnaise of my chicken sandwich”, but one who quickly catches himself out, exposing the artifice when


disappointment and nostalgia spray-paint themselves
onto this journey home.

Happy Hour is dominated by two types of poem: the intense vignette that takes a moment – the “after after-dinner” of a summer’s evening, or the confusion of shoppers in “Winter Clearance” – to plumb our modern lives for sense and significance; and a swiftly discursive, often longer single sentence piece that strings clauses together with half-rhymes and pulsing rhythms. The best – and indeed longest – of these, “Thinking About the Point of Things”, is a tour de force of personal, public and political dimensions, jumping from “placards of touched-up, / photoshopped, yet puffy, pasty-faced politicians”, through the redolent image of the garden’s “faded Gilbert rugby ball” and midges like “a swarm of small sun-gods” before arriving at a single robin, embodying a strange truth at the poem’s core. Elsewhere, a series of candid reflections take in a first trip to New York, in which Jamison’s eye for the telling detail and sense of humour meet head-on. A few of the book’s shortest pieces are probably too slight, indulging in nostalgia for nostalgia’s sake. While Happy Hour owes some obvious debts – Louis MacNeice, Paul Muldoon, Simon Armitage – it is an entertaining, enjoyable first collection that should attract admirers.