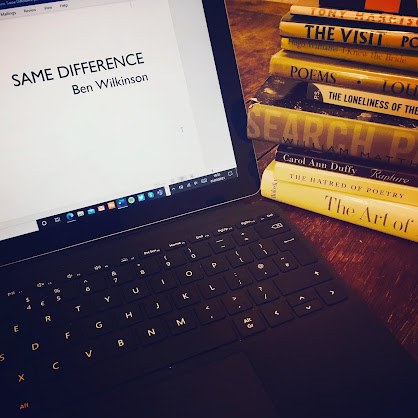 PUBLISHING MARCH 2022 WITH SEREN
Poet Ben Wilkinson made his name with incisive reviews for the Guardian. Same Difference is his second book, to follow his football-themed debut, Way More Than Luck (2018), winner of a Northern Writers Award and praised for its “formally experimental poems that celebrate even life’s sadness in fresh language” (Ian Duhig).

This ambitious new collection finds its author experimenting with poetic voice and the dramatic monologue. Carefully crafted yet charged with contemporary language, the book brims with everyone from cage fighters to boy racers, cancer patients to whales in captivity. Several poems unpick the preconceptions and prejudices that can inform so many of our encounters – with the world, art, and one another – while others take a sideways look at everything from male depression to the history of meat-eating; from the philosophy behind athletic competition to surreal yet familiar emotions.

Notable here are poems that wrestle with the mystery of failed and successful relationships, both providing moments of transcendence and despair. There are well-observed pieces about sport, particularly the rewards of running, from a noted devotee.

Wilkinson has also been deeply inspired by the French symbolist poet Paul Verlaine (1844-96), ‘stepping into the shoes’ and finding affinity with that poet’s astringent tone and ruthless clarity, borrowing his ‘punchy and musical’ phrasing. These add to the volume’s tonal and imaginative range.

While empathetic and often moving, Same Difference is a collection that seeks to undermine the confessional mode, keeping the reader on their toes and asking just who is doing the talking. It is also formally elegant, often using traditional rhyme and metre to weave its arguments. A tough grittiness here is offset by an essential tenderness, as in a musing about a mural of flowers by Diego Rivera: ‘But their weight on my back / is the weight of love itself, bright / yet strangely heavy; the faith we all carry / in our tired old hearts.’
Colloquial, straight-talking, ‘less deceived’ than Philip Larkin, Wilkinson brings a spiky 21st-century realism as well as formal adroitness to the contemporary lyric. In Same Difference he further expands his range with an interwoven series, ‘After Verlaine’, in which he discloses the French poet’s capacity for ‘hard thinking’ and accesses a newly sensuous and shadowy depth in his own imagination. –Carol Rumens
Same Difference is pitch-perfect. The poems and sonnets are remarkable for their emotional truth and craft; the versions of Verlaine are exquisite echo-chambers of the originals; and the dramatic monologues are utterly compelling. –David Morley
The range of this book is far-reaching and restless - its territory the shifting ground upon which is built the idea of a self - offering us the chance to think again about the intricate, sometimes delusional, stories we tell ourselves, ones that Wilkinson, here and with great clarity and verve, tells for us. –Greta Stoddart

POETRY IN MOTION Why one Reds supporter is committing his love for Liverpool FC to verse Liverpool FC and poetry have a lot of previous – from John Toshack’s Gosh It’s Tosh collection in the late 70s, to the verse of Dave Kirby and Peter Etherington in the fanzine Red All Over the Land , to the lines written by poet laureate Carol Ann Duffy, a University of Liverpool graduate, in the aftermath of 2012’s Hillsborough findings. Now there’s Ben Wilkinson, Reds fan and book critic for The Guardian and the Times Literary Supplement , who’s compiling a series of poems commemorating the club’s legends. “Football is part of the fabric of life, and anything that’s important to people finds its way into poetry,” he says. “Wilfred Owen’s poem 'Disabled' describes a soldier who loses the use of his legs, meaning he can never play football again. Philip Larkin’s 'MCMXIV' compares boys queuing to join the army to fans outside Villa Park. These poems have stood th
2 comments
Read more

Changes Birds singing in the rain, in the dawn chorus, on power lines. Birds knocking on the lawn, and poor mistaken worms answering them ... They take no thought for the morrow, not like you in your new job. - It paid for my flowers, now already stricken in years. The stiff cornflowers bleach, their blue rinse grows out. The marigolds develop a stoop and go bald, orange clowns, straw polls, their petals coming out in fistfuls ... Hard to take you in your new professional pride - a salary, place of work, colleagues, corporate spirit - your new femme d'affaires haircut, hard as nails. Say I must be repressive, afraid of castration, loving the quest better than its fulfilment. - What became of you, bright sparrow, featherhead? poem by Michael Hofmann republished with permission of the author first published in The New Yorker from Acrimony (Faber, 1986) I've loved Hofmann's poetry since I first came across an old copy of what I still think hi
7 comments
Read more

‘World is crazier and more of it than we think, incorrigibly plural’. Even if you’re not that well-versed in modern British and Irish poetry, chances are you’ll still know ‘Snow’, or a line or two from the poem will seem naggingly familiar. While still in his twenties, Louis MacNeice wrote it in 1935, and since then, it’s been a favourite with readers, writers and editors, cropping up in every kind of poetry anthology. Weird, then, that MacNeice’s work has often been seen as a footnote to that of his illustrious pal W.H. Auden, when he’s so clearly a hugely original poet in his own right. And when, among more recent generations, the likes of Seamus Heaney, Michael Longley, Derek Mahon, Don Paterson and Conor O’Callaghan have all cited him as a major influence in their own writing. It’s not like ‘Snow’ was a one hit wonder, either. Despite some of the less exciting – and often lengthy – stuff he wrote in the early 50s, MacNeice only got better, perfecting his moving, atmospheric an
2 comments
Read more