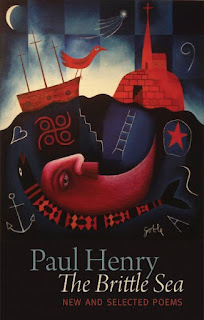 As the poet-critic Nick Laird recently pointed out in a review of the poet’s letters, the influence of Louis MacNeice is everywhere in contemporary poetry. His sprightly, masterly way with form and his sprawling themes – the blurring of past and present, personal and public, darkness and light – have made an impact on some of the best-known British and Irish poets currently writing. Paul Henry may be an unfamiliar name to some, but like the work of many of his better-known contemporaries, The Brittle Sea, his new and selected poems, owes much to the Belfast-born “laureate of in-between-ness”. This hefty volume takes in twenty-odd years’ worth of work, selections from five collections and a batch of new poems, yet like an intricate Venn diagram, all are linked by their abiding themes: how the past haunts the present, and how people and places change, as do our relationships with them.

Despite their MacNeice-ish content and formal bent, however, stylistically Henry’s poems are often expressionistic, even symbolist. Early pieces such as “Double Act” and “Love Birds” – both about couples making the most of the hand that life has dealt them – combine suggestive images and wordplay with short lines, oblique clauses and a subtle music. In the more reflective, avowedly lyrical poems, this restraint and exactitude remain, serving to reign in sentiment and keep self-indulgence in check. “The Visitors”, a sequence from Henry’s third collection, The Milk Thief, conjures female relatives from the poet’s childhood with eerie concision, while “Between Two Bridges”, in which the poet stalks his younger self around a changing city, employs a similar matter-of-factness:

Wind scales the river in its mud.
It squirms and pirouettes to the tide’s score –
dance of a reptile, forging its cast in silt.

The effect can be gripping, but Henry can go too far in his attempt to avoid solipsism: cloaking personal intimations in a wilful mysteriousness that leaves the reader behind. It is the new, previously uncollected poems that best strike a balance between the emotive and the clinical, often with formal skill and time and space-bending panache to boot. Here, a “gap between the railings” becomes “thirty-five years” and a meeting room sprouts wheels, sending us “through tunnel after tunnel”: the imaginative leaps justified, the emotional reach profound. They represent the best work of a lyric poet who deserves a wider readership.