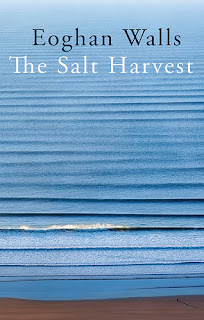 Eoghan Walls’s piquant debut crams more than most into its 60-odd pages. Faithful to the gritty physicality of nature, what separates The Salt Harvest from many first collections is a willingness to look for the poetic in pretty much anything, an almost aureate diction, and a darkly exuberant style that at times borders on excess. The book moves from secular hymns to the sea’s unforgiving cycles – the poet praising “lumpfish snapping medusae through stalks in the biomass” – through sketches of home life’s little details (the yard “a damp offstage to the house” in “Thirteen Foot by Six”) to the sprawling otherness of airport terminals and visits from extraterrestrials. For the most part, it comes off. Favouring a loose, typically anapaestic meter shaped into couplets and tercets, Walls can serve up a plate of cockles and gesture towards its human cost just as he more openly handles human frailties: illness, environmental damage, a flood that finds “sandbags are useless”. “An Ethical Taxonomy of Cordyceps” is a bridge too far, but the vigour and reach of The Salt Harvest makes him a poet worth watching.