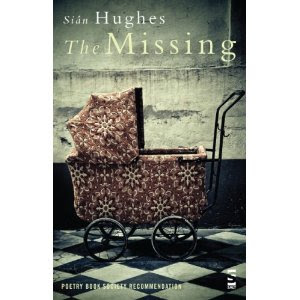 Siân Hughes’s The Missing is a short collection of, typically, short poems; a fact that belies this debut’s exactitude, hard-won emotional truths, and long road to completion. It is some thirteen years since Hughes’s vignette “Secret Lives”, appearing here in book form for the first time, first graced London’s tube trains as part of the Poems on the Underground project (and winner of a TLS competition), depicting a familiar suburban world of complex relationships with magical panache; where dressing gowns meet in the middle of the night to “head for a club they know / where the dress code is relaxed midweek, / and the music is strictly soul.” As much of The Missing demonstrates, Hughes has a real talent for capturing such fleeting, subtly significant incidents: a blend of delicate suggestion, invention and colourful wit characterizes her best poems, expressed in unobtrusive, idiomatic language. “The Girl Upstairs”, for example, treads the line between personal happiness and polite society’s expectations with conversational ease. Elsewhere, “The Stairs” provides a familiar snapshot of the difficulties of modern, often fragmented, young families, describing a party “where the children have taken the seats / in the living room”, and “no one consoles / the woman in a low-cut dress sitting outside the bathroom.”

Around midway through, however, the overall tone of the book changes: a shift from the playful, albeit tense feel of these earlier poems, to the brave and compelling pieces of the latter half. The focus here is parenting, particularly its many unforeseeable difficulties, with a number of poems addressing time spent in and out of hospital. These are as affecting and effective for their evocative, yet rarely merely decorative, description (“Fireworks on Ward 4C”), as for their arresting and deft use of speech patterns (in “Mengy Babies”, a distressed mother is found crying: “‘I kept phoning and telling them, something’s gone wrong.’”). But it is in a provocative elegy, “The Send-Off”, that Hughes’s writing seems most urgently committed. A haunting, touching address to the poet’s lost child, diagnosed with Down’s Syndrome before birth, it is difficult to examine the poem in typical critical terms: honest, and devoid of any agenda as it is. Along with many of the poems in The Missing, it memorably reveals the work of a writer capable of addressing emotionally difficult subjects with exceptional clarity and feeling.