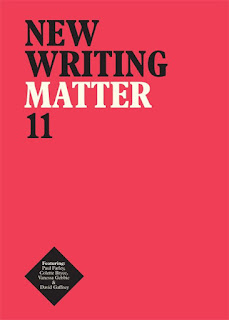 To those wondering how on earth Autumn has crept up so quickly despite having arrived late – September’s the cruellest; Eliot & Pound had it all wrong, man – I’m right there with you. 2011 looks to have sped on by, and it doesn’t seem a year ago that I was writing about Matter 10 – the decade anniversary issue of the mag published out of Sheffield Hallam University’s renowned MA Writing course – in this meagre corner of the internet. Yet here we are – or I am, at any rate – typing this up hot-on-the-heels (well, almost) of the launch of Matter 11, a rather funky, hot little pink number, as you’ll see from the above, that wouldn’t look out of place on a coffee table in some swanky hairdressers frequented by gaggles of rich-kid fashionistas.

Were it to find itself in that unfortunate situation, however, unlike the tedious fuckwittery that would odds-on make up the glossy pages of its idiotic neighbours, Matter’s pages are crammed with sharp, witty, gritty, honest, often edifying and, above all, entertaining writing of the highest order. An infuriatingly admirable combo of brains and looks. Something which the editors of Matter 11 have, in part, the guys and gals at Eleven Design to thank for, who not only supplied the striking boards and endpapers, but the fantastically spiky graphics and artwork that pepper its contents.

And what contents. I could point to the guest contributions, not least on the poetry side of things where there’s two new poems apiece from Colette Bryce and Paul Farley (“Brawn” in particular is the kind of fizzing lyric we’ve come to expect from the latter, yet are always surprised by: earthy yet dizzying, familiar yet eerie). But, as ever, the quality of the work here from MA students is easily just as striking. Listening to readers at last Wednesday night’s launch and following up their stuff on the page, I was particularly grabbed by Brigidin Crowther’s “Sylvia’s Wig”, a short story that mixes deadpan wit and fun-poking with an odd seriousness; the bite, quiet desperation, and unshowy wordplay of Matt Clegg’s sonnet “Raw Poem in Smooth Room”; and the almost Martian-like avian reimaginings of Suzannah Evans’ poem “Catalogue D’Oiseaux”.

All good reasons to get yourself a copy from the Blackwell’s on Hallam campus. The place has a top-notch modest poetry section, too, which being something of a rarity these days, is definitely worth a visit. Or, if you fancy listening to some of the contributors’ read in person over a glass of plonk or two, you can head to the London launch: 3rd November, 7pm, at the London Review Bookshop, so I'm told.