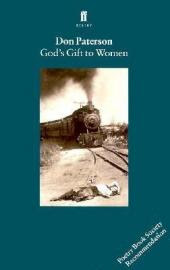 Remember that poem right at the end of Don Paterson’s God’s Gift to Women (1997)? The last in the book’s muddled sequence of poems that take their titles from the defunct Dundee-Newtyle railway line, it comes a handful of blank pages – actual blank pages, just to be clear, not the blank-page poems Paterson has a proclivity for – after the notes, isn’t listed in the contents, and got up the noses of a fair few critics with its mid-parentheses, mid-sentence, ostentatious ending. Really, though, nothing can disguise its intrinsic revelatory weight and significance, how ever much the poet seems at pains to undermine any naïve, earnest hunt for intellectual or spiritual meaning: the white page of its printing likened to snow, which in turn becomes a deity’s “shredded evidence”, falling from the skies.

Well, for those who haven’t spotted this already, you might want to check the copyright page of Landing Light (2003), Paterson’s equally acclaimed follow-up volume (if one discounts the magnificent “spiritual portrait” of his Machado versions, The Eyes (1999).) Here, for those who, as “A Talking Book” puts it, “drag each sentence through their fine-toothed combs, / all set to prove the Great Beast lies at slumber / in the ISBN or the barcode number”, is the follow-up quatrain, just below that italicised bit about not lending, selling, copying, rebinding, or reading choice pages out to random passers-by like a grade-A nutter.

I’m not quite sure what I make of it, but despite its apparent sincerity and lyrical solemnity, it seems like Paterson is joshing here, specifically with the kind of person who he half-expects would a) notice this kind of thing in the first place & b) bother to link the two quatrains up and pore over ’em for a while (i.e. me), and what he/she might make of it all. I get the feeling that a part of Paterson reckons – and maybe on the whole, he’s not totally wide of the mark – that many a literary scholar lacks the requisite sense of humour when it comes to scrutinising poems to understand his point here, which is that, essentially, if you look hard enough into anything, you can in turn, if you like, see pretty much anything you want reflected back – maybe, say, your own straight-laced critical brilliance if you’re so inclined. But make no mistake, the poem suggests, you’re wasting your time, since such an approach does great poetry no service whatsoever. You might just as well apply your dazzling exegesis to the dullest of shopping lists and look forward to much the same result.

So the poem’s a bit of a joke, perhaps, but a joke that makes a serious point. Whether the forgivably naïve gusto and application of the serious undergrad, or the wasteful idiocy of brilliant minds who really should know better, looking for meaning as something already resident within any text, the poem suggests, is just plain wrong. The journey, the road, the natural process of reading for what the text might meaningfully generate, is where the interesting stuff happens; not at the oasis, a mirage of intrinsic transcendental meaning, where the tortuous, minutely scrutinised road meets its imaginary end.

This is, then, a defence of poetry as something which means – in that reified and wholly false sense – nothing at all, yet at the same time, far from meaning whatever you want it to mean, is charged with huge transformative power and an unrivalled sense of possibility. Though if you feel like asking why Paterson didn't just damn well say that, you might not be getting this.