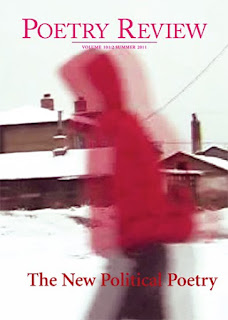 The recent ruckus at the UK’s Poetry Society has so far seen plenty of finger-pointing, gun-jumping, side-taking (but which sides? and who’s on them?), as yet unsubstantiated rumours of some supposedly shady goings-on, high profile resignations, and a(nother) quite funny rehash of one particularly reiterable scene from epic war film Downfall. Business as usual in poetry-biz-land, then.

Something that’s also been bandied about is the idea that the Poetry Society would be better off doing away with Poetry Review. Of course, I would never suggest that many, indeed most of the more fervent supporters of this idea are of an ilk that reacts very, very badly to repeat rejection slips. But I will say that one of the main, if not the reason I continue to be a paid-up member of the Society is to get my quarterly subscription to what has always been a thoughtful, provocative, entertaining, infuriating, but above all engaging magazine.

Yeah right, Ben, you would say that – you’ve got a poem in the latest issue! Ah yes, so I have. Well, shoot me down. Tell me it’s exactly the same as every poem that Poetry Review has ever published; bourgeois, nice & safe, formal pillar of mediocrity that it is. Then send me a copy of a real magazine, with avant-garde stuff that boggles the mind in its self-reflexive boundary-pushing, i.e. its brave disregard for not only sense and musicality, but also for the reader, who’s fast giving up on trying to wrestle something, anything from the brave new spattered word-shrapnel. Amen.

Now the cutting edge trend-vaulters have gone (or as ever, are one step ahead on the road to nowhere, scrolling down to the comments box) and I’ve stopped madly addressing myself, let me tell you that, truly, there’s some great stuff in the latest PR. New poems from Jamie McKendrick, Philip Gross, Daljit Nagra, Adam Thorpe; fascinating political letters to Crane, Milton and Shelley from John Burnside, Gwyneth Lewis and Neil Rollinson; reviews of Duhig, Cope, McDonald and others, including a round-up of debutants. The series of poems by David Harsent for the World Wildlife Fund, commissioned to accompany photographs as part of the ecological campaign Fragile Beauty, are especially compelling in their subtle, dark, questing arguments, as is the Centrefold perspective on Harsent’s work to date by poet-critic Sean O’Brien. Well worth a read.

And before I nip off to sort a nightcap, here’s a link to Dan Wyke’s blog, who kindly asked if he could feature my stab at translating Eugenio Montale’s “Il Balcone”. Needless to say I can’t speak Italian (back when I wrote the piece I worked from a mixture of literal translations and existing versions to first get a feel for the poem, before attempting to make my own), so I’m chuffed to have the poem praised by someone who can, and who’s also a talented poet in his own right. Check out his debut, Waiting for the Sky to Fall, to see what I mean.