December 08, 2009
Like many other poetry readers and writers, I was recently invited to submit my three favourite poetry collections of 2009 to Michelle McGrane's feature on her Peony Moon site (if you missed it, the first of eight installments is here). And like other readers and writers who also happen to blog from time to time, I thought I'd elaborate a little on these choices, while also offering a few other collections which would have been included on a longer list (of six, to be exact).

Carrie Etter's The Tethers was perhaps the easiest choice - I can't say too much about it as I'm reviewing the book elsewhere, but its poems are so elegant, precise, witty and intense it made for a reading experience unlike any other I've had this year. Full of allusion and yet entirely contemporary, by turns darkly serious and unusually funny - it's lyrical invention, range and ambition make obvious the collection was years in the making. Take the wonderful close to 'The Daughters of Prospero':

Placing white boat after boat onto a brook,

because she has learned beginner's origami,
because her fingers have amassed a score of cuts,

because some of the boats never looked seaworthy,
because a surprising number can glide like swans,

the girl sets her boats on a fatal course, and though
her head is bent, I can just see her eyes' fierce gleam.

I also chose Roddy Lumsden's Third Wish Wasted; somewhat of a departure from his earlier work, though the development evident in this book was hinted at in his previous collection, The Drowned Man, published in his New & Selected Poems. Its formal invention, wry humour and leaping from dazzling image to image are refreshingly energetic if sometimes dizzying, and the best poems - 'Against Complaint', 'Keepsakes', 'Stone Tape Theory' and 'The Beautiful' - are the business. Here are the final pitch-perfect lines of the latter:

desire them but cannot want such order.
We stand, mouths open, and cannot help
stammering our secrets, nailed to water.

The other collection I picked was Don Paterson's Rain. A predictable choice, some might say, but give me a chance to explain first. I'm not so much a fan of the book as a whole - I think in terms of consistency it can't quite compete with God's Gift to Women, or even Landing Light - as I am for its containing what I think are some truly remarkable individual poems, borne of Paterson's Frostian lyric gift, melancholic humour and brilliant turn of phrase. 'Two Trees', for instance, is an elegant yet unadorned poem which slyly, almost frustratingly, undercuts its cumulative beauty in its terse final lines, while the sprawling 'Song for Natalie 'Tusja' Beridze' is a liberated celebration of music and the internet, reflecting all of our geeky obsessions. I don't think it's too bold a thing to say that both will probably be remembered among the major poems written at the start of this century. For my money though, the title poem is still by far the best in the book, though I'm a sucker for this kind of soaring lyric poetry:

I love all films that start with rain:
rain, braiding a windowpane
or darkening a hung-out dress
or streaming down her upturned face;

But while I'd recommend all three of these titles, there are a 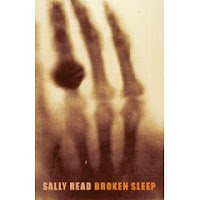 handful of others I'd also like to point towards. First is Sally Read's Broken Sleep, her second book since her impressive Bloodaxe debut, The Point of Splitting. I've only recently got stuck into this collection having bought it some months ago, but as with her debut, I've enjoyed what I've read given her ability to marry a gentle, closely observant lyric style with often difficult, even painful, subject matters. In the main sequence of poems which address pregnancy, birth and motherhood in often surprising ways, the title poem is particularly memorable; partly in dialogue with Plath's 'Morning Song':

The birds rise together as though

on an up-draught. I spread
your outstretched fingers
on the back of my hand as you
work away at one breast -

ears pulling in time, toes curling;
your whole body drinking -
and lost milk from my other breast
grows cold as rain on my nightdress.

Another book worth buying is

Tony Williams' debut, The Corner of Arundel Lane and Charles Street. As the title suggests, Tony is a Sheffield-based poet, and it was grand to read at his collection's launch, having followed his poems' appearances in mags and journals over the years. There are plenty of reasons to read Williams' poems. First, his influences are as much European (and specifically German Romantic) as they are British, which makes his best work highly distinctive. His poems are also funny, and witty, though as W.N.Herbert notes in his endorsement, '[Williams] understands that wit, as much as it may delight the reader, is always melancholy'. 'The Matlock Elegies' perhaps best captures Williams' ability to combine insightful profundity, ennui and wicked humour to great effect:

O my beloved Matlock! Market town
with barely a market to speak of,
my county town, my botched Eden.
Old Matlock, Matlock Green, Matlock Bank,
loop of the hated supermarket road,
the old quarry where the valley's
truculent aggression pools as sediment,
the satellites of Tansley and Elton, Winster,
Lea and Holloway. Matlock Bath,
tawdry jewel, I curse you as a tourist honey-pot;
you shadow me even unto Death. You slink
like a line of warts through the gorgeous
rock of my deliverance. A part of me
wanders forever round your amusement arcades
in an off-white polyester shirt smelling of stale teenage sweat
and a blue school tie. Another is sick in the woods.

Last, but not least, I'll

recommend Rob A Mackenzie's debut, The Opposite of Cabbage, a collection I reviewed for Magma 44, where I described his writing as 'switching between playful contemporary wit and dark humour, honest feeling and compassion, and an occasional, beguiling obscurantism driven by language's slipperiness and a distrust of simple explanations'. Bernadine Evaristo sums the collection up nicely by describing Mackenzie's poetry as 'kaleidoscopic' - varied, often unusual, frequently shifting register and changing tack, it's a mixed yet surprisingly consistent book of poems. But my favourite piece is still 'In the Last Few Seconds', which vividly paints the cinematics of a car crash:

You expect a a flashback, a potted bio
of divorce and automobile replacement -
how one breakage led to another - film noir
bleaching the blackness,

but instead stars blister across the sunroof.
Cracks appear. You wait for the tunnel sponged in
light from some new world. But the car splits water,
floats in its shadow.

All books worth getting hold of, then, and that's before I start on those poetry volumes which aren't single collections, including Michael Donaghy's essential Collected Poems, and the Byrne and Pollard edited Bloodaxe anthology of younger poets, Voice Recognition. Also difficult to believe that certain collections were published over a year ago, like Mark Waldron's excellent debut...

----------
In other "news", it's also just over a year since my first pamphlet of poems, The Sparks, was published by tall-lighthouse press - eleventh in their Pilot series, showcasing emerging British and Irish poets under 30.

As expected, it didn't exactly receive a raft of reviews, but then pamphlets never tend to get much coverage, and I've been fortunate enough to receive kind comments on it from various poets and readers, which has been encouraging.

Since publication it's also sold steadily, at readings and other events, and at the Sheffield Hallam University branch of Blackwell's, who took a chance on ordering it in, and have stocked in another handful each time it's sold out, for which I'm really grateful.

Thanks to this kind support, it won't be long before the first modest print run has sold - something which makes me personally chuffed, but mainly thankful that people have bought it alongside other tall-lighthouse titles, and so supported an excellent small press - home to up-and-coming writers including Adam O'Riordan, Emily Berry, Helen Mort, Aoife Mannix, and many more besides.

For those interested in getting hold of a copy of The Sparks who haven't yet, there are still a few copies available at the Blackwell's mentioned above, and you can also find it on the tall-lighthouse website, here. I'm not going to lie to you and say they'd make perfect Xmas gifts (there're no mentions of reindeer, tinsel, or turkey dinners contained within its pages, and snow only appears as a bit of wishful thinking), but I'd appreciate the support nonetheless.

I'm also reading a poem from the pamphlet on Asking a Shadow to Dance, a forthcoming DVD from Oxfam, along with readings from Daljit Nagra, Kayo Chingonyi, Lorraine Mariner and Heather Phillipson, among others - more on which in the near future.