A Pint for the Ghost 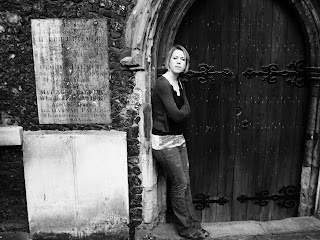 A fair few poetry readers who drop by these parts might already know of Helen Mort, a Sheffield-born, Cambridge-based poet who won a Gregory Award in 2007. Her first pamphlet of poems, the shape of every box, was published the same year, and I'd recommend getting hold of a copy if you can - it's a good read full of distinctive, musical, lyric poems that are accessible, candid and sometimes marked by deft, even dark, humour.

But Mort also has a new pamphlet in the pipeline, and one which is rather unusually accompanied by a "one-woman poetry show": A Pint for the Ghost. This, as the show's curious blog states, "is set in a deserted pub after hours where strange characters come to introduce themselves. From the phantom miner at Hanging Flatt to the spirit in the hospital x-ray machine, the ghosts of Derbyshire and South Yorkshire saunter in for a drink with me. Join us at the bar when the show is finished later in 2009."

It promises to be an unmissable event, then, including music, poems and stories, and will be touring around the country from late 2009 through 2010, so worth looking out for if it's going to be at a venue near you (and by the sounds of things, it won't all be in the sorts of venues you might expect...).

In the meantime, do check out the A Pint for the Ghost blog, which features sample poems from the pamphlet and show, and posts on everything from the derelict pubs of modern London to Mort's favourite drinking haunts from across the country. Mine's a pint at The Devonshire Cat.