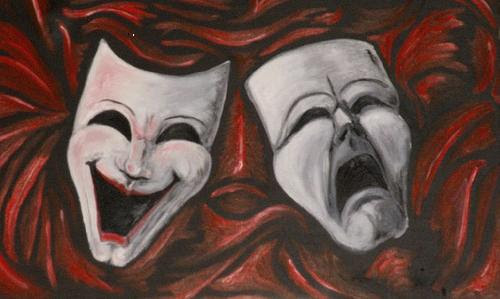 Today: As well as research and reading for a review and a critical perspective, two new poems that a) emerged quite quickly and b) after tinkering and editing later in the day, I am happy with.

Tomorrow: The realisation that said poems require a lot of work, or worse, that they are irredeemably crap. The consolations of yesterday's research, remaining as it does useful and - more or less - intact.

Anonymous said…
Have you any idea on what area of Research you will specialise in yet ben?

Seven yrs to become a doc, so three more and the expert gets, Real -- at least that's the theory.

When we left after the final sixteenth module, (half Writing Studies) the twenty fourth in total (counting the first yr - whose marks do not count) the final day was pretty unemotional.

One of the chaps said he had learnt only that he felt - at that time - he was not tempted to continue in either Film or Writing (D's degree was a joint film studies and writing studies) and had instead, joined the army of his Nation, to get a chunk of Reality beneath his belt, some experience in the tank.

Later in life, he was fully prepared to admit, Writing may control him, but on that fateful final day, all of us in a unique self-authored stage of exit-trajectory, some left with a full kit bag, in apple pie order, the true state of knowledge one had back then, was hazily firm, p strange, a NW order in West Lancashire, the heart of a very mythic plain, on which many epic wars had been fought,. over local rows and wider tragedies of the pre-Christian geo-political frames and spheres of influence the various (mainly war-like) ancient Brython tribes created prior to the Roman invasiuon and the Latin base on which nearly all english Language poetry,, sprung.

Myth, that is all poetry seems to be about, and we can have it po-mo ironic, swearing (not in real life of course) the characters who come to us, saying rude words now and again: and for this any myth will do, and the temptation in this age, is too fragment, invent one's very own Poetic base from which to project our ventriliquist act, of whatever it is Poetry makes the annal of imagination record, and it starts in Sumer, at the tower of Babel and the flood.

The best recorded reading i have heard, and by far the book of poetry which affected me most since arriving in Dublin to continue my research, is Derek Hines reciting his tour de force re-rendering of the ancient Sumerian myth

Anyone professing a poetic interest who has not come across his award winning book should, in my opinion, acquaint themselves with his work and experience a truly original contemporary Canadian voice of great power and breadth, and which most serious practitoners recognise as operating on a higher frequency and one of deep awareness and accomplishment, inf both craft and technique. His inventiveness was head and shoulders above anyone else, and it was clear from listening to this poet, he is in a league of his own:

"Fill the sky to choking
with a reedbed

..a blind of shafts
..the very air woven by

his merest gesture to fable...
the crush of gravity's paint

..till void reabsorbs
..a smash and grab of years
...a protector, got drunk,

..back flip...the map
marking time
...washed up as far south

as man or god can go
..like the madam who ran the roadhouse

..our lady of times edge
..we find him there

pushed to the worlds prow,
barely more than a beat
in the days narrative"

Hines made a four thousand yr old
poem, which many consider the closest we have to the earliest (and uncorrupted) truly ancient myth, which the NW order of scouse beat God bothers, find very rewarding to experience.


It took me four years after leaving formal education, to absorb the system of my Tradition -- for it to *appear* whole, as it were.

And the correct way - for me at least - as now the other Myth systems, which grew out of Sumerian and ancient Egyptian star knowledge (and on which our own mungrel mix and mish mash oddly matched one the Latins influenced our Culture to claim as their own: now it is clearer, how Goidelic myth, irish legend, rests on an identical (numerical) poetic base..


the Metric at the baseof poetry, is standard, or rather, my research has lead me to conclude, the most uncorrupted system is the bardic one, and poetic knowledge is the same whether we are addicted to cartoon lore of a self-invented poetic we make up blind, orthe most ancient Sumerian code, and their planet X, their watchers and angels came from, some speculate, is has aancient extra-terrestrial keys to understanding it in the fullest terms of existential proofs, which is not for the skeptical dreamer unresponsive to -- what a hundred yrs ago would be dismissed as the rantings of a mercury poisoned mad person but now -- the most challenging and axiomatically shattering theories upon the whole natural core fabric of whateber it is poetry reveals to us in the self supported learning states, alone and the reasons we find, logically, with provenance, i trust they who Know, the *knowing ones* of the literal translation of a poet in ancient times, on these islands at least, thousands of years prior to Chacer, the grandfather of our classical canon's tongue.

And so good luck

love and peace, the society for truth reporting now on the alternative News way the net has, of concerned people no longer having to swallow the conjectural stuff, but truly export our minds to a sort of fourth dimension of understanding myth, after the keys to illumination whatever gods we trust and make, gift us critically, our Research into the nuts of it, to Gilgamesh and all that mob, all the earliest sources..

surely this is the logical route to real knowledge of the throne room at Tara, called

the High King - Ard Ri
their throne was this
appellation and when one studies the stuff, it is clear that Robert Graves is right in his assertion that Ireland and Wales were the final resting place of the essential BC mode and mind, but my own take is that a lot of the critical uncertainty (not by you of course) displayed by the miners of the soul, is due to Real fruits not that plentiful, as most poracticing today, take their cue from ABCDE or whoever, ms X, and mistake the straight face one liners pitched in tenors that wld have the lay reader beleive the author is well up on this Expert are of research, but often alas, this is a sham and tragic really, that our positions are often just a pose, and so a hundred best folk in a room, rarely lowering their guard and admitting

but rather, confuse real star knowledge on the page, for vaugue imitative attempts at being a composite someone else, instead of being ourselves -- or rather, not arrogate ourself any claim to possessing any self-cut keys to unlocking the puzzle of eternal space, but to learn for Love and poetry, to be as good as we can intellectually, to prove using fictional art to prove faculties' assassin in the status quo - is 12 whatevers in play before the hour turns into eternity and we win some stuff, because such a person wants to help us out, for whatever human reason they are (or not) sharing a space on the bus of love and peace, traditionally, we pretend....
10:53 am