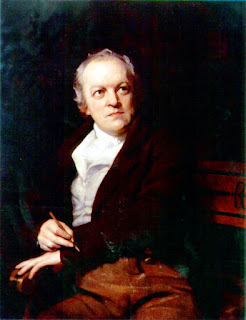 As David Caddy's 'Letters from Poetic England' note, this coming Sunday (12th) marks 180 years since the once overlooked, now seminal and hugely significant, poet William Blake's death. This year is also significant as it marks 250 years, come November 28th, since the poet was born. To mark the occasion, I thought I'd post this critical essay which I wrote sometime ago, exploring the social concern evident in arguably Blake's most important work, Songs of Innocence and of Experience. May Blake's memory remain as one of poetry's richest and most groundbreakingly subversive talents.

In 1940, George Orwell, the great author and socio-political commentator, remarked of Blake’s ‘London’ that ‘there is more understanding of the nature of capitalist society in [this] poem… than in three-quarters of Socialist literature.’ Such a statement is neither unwarranted nor, arguably, hyperbolic: after reading an illuminated copy of the Songs, the politically-minded and liberalist poet Samuel Coleridge described Blake as ‘a man of Genius’, William Wordsworth and Charles Lamb bestowing him with similar praise. The social significance of Blake’s work then, particularly Songs of Innocence and of Experience, is undeniable: the poems throughout the book explore the complex relationship between meaning and morality, the often blurred lines between the two contrary states of innocence and experience, as well as pervasive and widespread corruption: of church and of state, of the decline of sociability or ‘brotherhood’, and of the dulling of our sensory perceptions through the inevitable ‘fall’ from innocence. In this essay then, I intend to consider some of Blake’s most poignantly sociological poems, and conclude that whilst Blake’s main social concerns lie within the increasingly narrowing, claustrophobically subjective world that he presents (and witnessed as a lifelong Londoner), he nonetheless offers us a way out, through a revised sense of fraternity, sexuality, and objective awareness, which, he believes, will ultimately ‘cleanse the doors of perception [and make] everything appear to Man as it is, Infinite’.