Review of the Klaxons' Myths of the Near Future 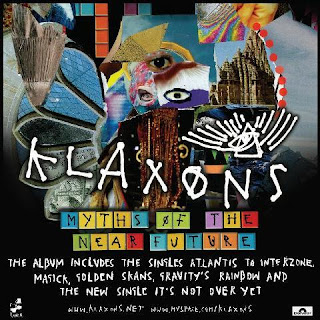 Let’s be clear about this one: the hype surrounding the ‘nu rave’ scene in the past months has thrown up a host of bands that have less to do with E-fuelled fluorescent weirdos listening to the musical equivalent of a flea-bitten moggy being violently sick over your new carpet, and much more to do with a new breed of indie band, namely one which is in tune with the crackling variousness and potentiality of contemporary rock music.

Enter Klaxons. A three piece born out of Stratford-upon-Avon (you know, Shakespeare country) and Bournemouth, they’re smart, savvy, and worryingly fluorescent. But while many of their die-hard fans insist on brandishing glow-sticks at their gigs, and while the sirens and vocal loops scream out from their single, ‘Atlantis to Interzone’, their sound is one which reveals an impressive and stellar mesh of influences and ideas fighting for supremacy in the collective Klaxon mind. It’s like their trying to write weird and wonderful songs that stretch on into infinity armed only with the standard instruments of your average rock band: vocals, guitars, bass, and drums. Klaxons almost seem to be striving to do with contemporary music what the likes of Thomas Pynchon attempted to do with the modern novel: pick up the same tools as everyone else, craft something bizarre and initially unsettling, and transport the reader/listener and their expectations to somewhere at once bemusing and incredible. Perhaps an odd comparison, until you listen to first single ‘Gravity’s Rainbow’ and realise that the Klaxon boys have done their homework.

Where the Klaxons shine, then, is in borrowing from rave’s and dance’s finer attributes: adding synths and loops to hone and refine their fizzling, Johnny Greenwood-esque guitars and rolling bass sounds to perfection. This is particularly evident on the aforementioned ‘Gravity’s Rainbow’, but also on the cosmically Muse-like and eerily-moving opener ‘Two Receivers’, and their impressive and soaring cover of Grace’s mid-nineties rave hit, ‘It’s Not Over Yet’. But while the Klaxons show much promise and live up to much more than the hysteria of being flag-bearers to a genre nobody seems to know much about, they are nonetheless somewhat limited by the resources at their disposal, as matched with their fantastical and interstellar musical ambitions. It’s all there in the alluringly strange and ambitious harmonics of their lyrics: songs about setting sail, travelling from Atlantis, floating on ‘silver waves through the skies’, even in one of the album’s surprise highlights, ‘Isle of Her’, a song about rowing towards paradise, notably inspired by Greek mythology. The Klaxons want to soar: their diverse range of literary, mythological, cultural, and musical influences fighting for space in songs that vary from a couple of minutes in length to six minute stompers. But often they’re held back, either by their collective tremulous vocals not quite matching the demands that their songs make of them, or by too many sounds and ideas clunking about tunes that would benefit from being tidied and tightened. But then this is only their first album, and I’ve got high hopes for the Klaxons’ future efforts. After all, in the space of a year they’ve been plucked from relative obscurity and have churned out an album that’s on a different (and in my opinion, much more habitable and colourful) planet than that which the Arctic Monkey’s did as 2006’s surprise success. For while your listening to the Franz Ferdinand crackle and throb of ‘Totem on the Timeline’ one minute (with its decidedly weird line ‘At Club 18-30 I met Julius Caesar, Lady Diana and Mother Theresa’), suddenly Klaxons spring the surprise of follower ‘As Above, So Below’, a song that has more in common with Belle and Sebastian and the Scissor Sisters than anything else. And it’s this ability to blend diverse influences with artistic integrity and, crucially, a sense of fun, that ultimately makes Myths of the Near Future such an impressive debut. Not to mention one that bodes well for the band’s future.