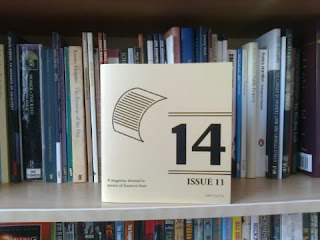 Rosemary said…
It's certainly hard to blunder through all the tiny mags to find those worth sticking with... thanks for the review. I would have thought Pen Pusher's 'get lost' was illegal, actually, if they've taken money for a product and not supplied it.
10:16 am

Unknown said…
very kind review Ben. Rosemary I am pretty sure you're right about Pen Pusher (sad to see it gone) and I'd like to reassure Ben's readers I keep detailed accounts, including records of how much each individual subscriber has paid up in advance. I dread to think 14 would get close to the stage of having to stop, but if it did it would plan ahead for it and reimburse everyone accordingly. (Just in case you're worried). But let's not get to that stage! Finally, in this slightly long comment, please use Ben's link to 14's own website above for the latest address and details - rather than the Poetry Kit indie mag link, which has old info, and I've emailed Poetry Kit about this.
Hope to hear from some of this blog's readers in the future at 14.
www.fourteenmagazine.com
5:23 pm