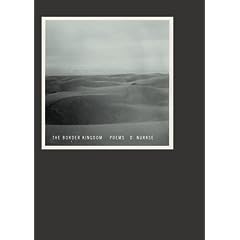 In much the same way that D Nurkse’s seventh collection of poems, The Fall (2003), comprised of three sections of grouped poems, his ninth and latest book, The Border Kingdom, is divided into four sequences. The variety of the poems and the uneven length of the sequences, however, suggest that the book’s prevalent theme was not conceived from the outset. Poems, after all, have a useful tendency towards naturally grouping themselves together and forming a coherent whole; different poems extending into one another through recurrent images and themes, as a result of the poet’s preoccupations, interests and concerns. Where The Fall’s sections addressed childhood, married adulthood and illness in old age, then, charting the Blakean journey from innocence to experience and the consequent fraying of our thoughts, beliefs and singular identities, The Border Kingdom’s four groupings of poems approach states of limbo and ambiguity from an assortment of often unusual angles, spanning wars waged from the Biblical to the present and the fractures and fragments left behind, to the legacies of fathers and the complex heritages that they leave their children.

‘Jericho’ opens the book’s first section, ‘The Age of Crusades’, in an intense, if elliptical, burst of imagery. Describing ‘a high window’ where ‘a white curtain knotted against itself / gives a glimpse of the lovers / as they were before the war’, this deceptively simplistic poem depicts the ‘undo[ing] of a mother-of-pearl snap / while a cat perched on the sill / looks down with burning eyes’. Despite Nurkse’s tendency towards the longer, often sequential poem, then, in many ways this short, sparsely rich account of intimacy in a city dominated by conflict sets the tone for the rest of the book: tender, humane and evocative whilst at the same time darkly political and historical, Nurkse’s poetic voice combines felt emotion and level-headed thinking to impressive effect. In ‘Albi’, for instance, another poem in the collection’s opening section, the narrator’s harrowing tale of his being ‘sealed up in a wall’ is related matter-of-factly in precise, conversational lines, but with an eerie feeling that is – as good poetry should be – difficult to describe; emotional and strangely spiritual, yet also markedly impersonal: ‘Then I was the wall itself, / everything the voices long for / and cannot have – the self, / the stone inside the stone’.

It is this captivating style that lends Nurkse’s poetry its sometimes startling originality. This is especially evident in ‘Ben Adan’, an arresting poem in which a seemingly innocent prisoner is instructed by his captor to dig his own grave. Here, it is less the haunting beauty of the poem’s imagery, despite its imaginativeness (‘At thigh-depth I found / a layer of black loam / and a tiny blue snail / that seemed to give off light’) than the disconcerting yet well-pitched tone of the narrator’s voice (‘perhaps in a moment / he will lift me up / and hold me trembling, more scared than I / and more relieved’) that gives the poem its poignancy and delicate weight. This allows the poem to interrogate the reader’s notions of power and captivity (in both a psychological and physical sense) in ways that a more straightforward engagement would fail to hit upon, and Nurkse’s work with human rights organisations have no doubt helped contribute to his producing such accomplished poetry on the matter.

In the book’s second sequence, ‘The Limbo of the Fathers’, there is a continuation of this type of (im)personal political poetry; finding poignancy and wide-reaching revelation in the nuanced specifics of individual lives, rather than looking for history’s lessons on a larger, grander scale. ‘In the Hold’, for example, is an affecting account of the poet’s father leaving Nazi Germany as a stowaway in ‘the stifling void’ of a boat, depicting how he ‘counts the coins in his sack, / the stitches in the gunny weave – / takes his pulse, then having / no more real things, he counts / the members of his family, the chimneys / of his village, all the days / of his life in the old country’. Similarly, the deft specificities of the poet’s memory in ‘Practice’ – recalling his throwing ‘a white Spaldeen / shaped exactly like a baseball […] / all morning at the fence post’ as an extended metaphor for our childhood ‘practicing’ at adulthood – makes for an enjoyable and gently nostalgic, if slightly inconsequential, poem; the poet ‘relieved of a great burden / to see [his] father so clearly, / shivering, gray, stammering to himself, // mincing a clove of garlic / until it was fine and plural / as the gesture itself’.

Unfortunately, The Border Kingdom’s third sequence, ‘The Limbo of the Children’, is less engaging than these earlier poems. This is perhaps odd as the section also contains a handful of the book’s best pieces. Among these is ‘Canaan’, a short lyric on the failures inherent to language which, though bringing little new to our postmodern understanding of drifting, unpredictable signifiers, finds, in both senses, fantastic images to evoke our relationship with the spoken and written word: ‘How the mind wound up the doves / and sent them volleying / over the shepherds’ low fences’. This delight and frustration with the failings of communication is also conjured effectively in ‘The Child’, in which the young narrator describes how ‘no one calls me you. / I am addressed in the third person / as if I were sideways to the world’. It is a shame, then, that these poems sparkle among a sequence which is otherwise littered with numerous narratives reflecting on nature and mountains in particular, which, though often richly descriptive and subtly musical, are too often full of inactive lists that do little more than to describe (albeit atmospheric) landscapes (‘Hitching to Mount Hebron’, for example, or ‘At High Falls’).

This aside, however, when Nurkse hits his stride such writing can begin to evoke the Hopkins of ‘No Worst, There Is None’, and even the Wordsworth of ‘The Prelude’, in its merging of the landscape with the poet’s state of mind. In 'The Border Range’, for instance, the narrator states how: ‘Sometimes we boasted / of the waterfall, the whirlwinds, / the downy soft-pinioned owl / drifting in daylight / with a hole in his voice, / the immense cliffs’, before concluding: ‘And that is all anyone knows / of those years of marriage, / labor, voluntary poverty: / those mountains were perfectly flat / and exist only as a little rip / where the map was folded once too often’. Through taut language and economic use of imagery, this poem succeeds in adopting our relationship with nature as a metaphor for our often difficult relationships with one another, an impressive feat which Nurkse pulls off with considerable skill.

It is satisfying to find, then, that the closing sequence of The Border Kingdom, ‘The Gods’, is the best of the collection; comprising of consistently engaged and engaging poems on the difficult subject of conflict in the contemporary world. The success of these poems often rests on their approaching subject matters from oblique angles: in ‘Late Summer’, for example, an unknown terror grips the narrator who ‘ha[s] to remind [him]self: / this is darkness’, while in ‘Liberation in Winter’, the threat of a bombing is described as ‘maybe just a faux pas between lovers // who lie naked, an inch apart, / in the stepwise shadows of the blind’. Similarly, the fallout of 9/11 is addressed with care and subtlety, imagining ‘children [drawing] the plane, / sticking out their tongues, pressing / hard with crayons, never looking up / as if they’d seen it all their lives’. Here, the towers in the child’s drawing become ‘a huge box’, ‘the fire – an orange flower: / God – a face with round eyes / watching from the margin’, and ‘the fireman in his smudged hat / running with outstretched arms / up a flight of endless steps / that veered suddenly off the page’.Just as the sequence, and collection, closes with the image of ‘round pools, / […] trembl[ing] as if a child swam there’, then, the thought-provoking child’s drawing in ‘After a Bombing’ most starkly suggests an idea that recurrently surfaces throughout this deeply philosophical, deceptively simplistic, and often rewardingly discomfiting collection: namely, that our habitual handle on the world is often staunchly limited, narrow, and thus frequently inadequate, and that greater understanding, even redemption, may often lie in a freer, fuzzier, and more openly imaginative approach to the world.

It is to Nurkse’s credit that he has written a book of poems which expresses this so unprescriptively and effectively, then, and that explores a great deal more besides in diction and syntax well-pitched between ordinary speech and poetic elegance; a collection which is much more, as the narrator of ‘Canaan’ states, than mere ‘signs on the blank page’.


This review originally featured on Eyewear.

Pascale Petit said…
Thanks for this thoughtful review of one of my favourite poets, he achieves so much in subtle fresh ways. A lovely man too, whom I have the pleasure to know. Modest and unassuming. I recommend all his books.
10:18 pm